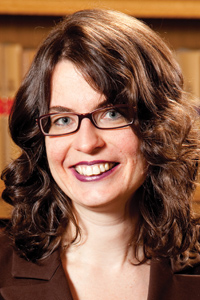 Ludmila Herbst is a partner at Farris, Vaughan, Wills & Murphy LLP, a leading British Columbia firm. Ms. Herbst practises in the areas of corporate and commercial litigation and arbitration, including energy and regulatory matters. Ms. Herbst has represented clients before all levels of court (both trial and appellate) in British Columbia, the Supreme Court of Canada, arbitration tribunals, and administrative tribunals including the British Columbia Utilities Commission. Ms. Herbst has acted for substantial clients in the electricity, mining, media, real estate development, and manufacturing sectors, among others.

Ms. Herbst frequently publishes on issues pertaining to her practice. She is one of the two co-authors of Commercial Arbitration in Canada: Domestic and International Arbitrations, a leading text on arbitration law that has been cited by trial and appellate courts across Canada. Ms. Herbst is the assistant editor of, and a contributor to, the Advocate, a legal journal circulated to all lawyers in British Columbia with a readership throughout the Commonwealth. She is on the editorial board of, and contributes to, a text on British Columbia Business Disputes, which won an Outstanding Achievement award from the international Association for Continuing Legal Education. She has written for numerous other publications on topics including commercial arbitration, civil procedure, the sale of goods, evidence, and women's legal history.

Ms. Herbst has served on the executive of the BC branches of the Canadian Property Tax Association and the Administrative Law subsection of the Canadian Bar Association, and is the former president of the Advocates Club, an organization of Vancouver lawyers. She belongs to the by-invitation Western Canada Commercial Arbitration Society, which is open to senior arbitrators and senior members of the bar who have demonstrated a real commitment to the growth and development of arbitration in Western Canada.

Ms. Herbst has received many accolades. She was named female litigator of the year for British Columbia by the 2013 Benchmark Canada Litigation Guide, is named as a national Litigation Star in Arbitration, and is a Local Litigation Star in Class Actions. She has been recognized in the annual Best Lawyers Directory as a leading corporate and commercial litigator. In 2010, Lexpert named her as one of Canada's 40 Leading Lawyers under 40. She graduated as the Law Society Gold Medallist from the University of British Columbia.